As the name suggests, the buttercup comb is one of the most distinguishing and unique characteristics of the breed.  There are many different types of chicken combs, as pictured here, but the Sicilian Buttercup is the only breed with the buttercup comb.

An ideal buttercup comb is a deep cup shape with points around the perimeter, and a small blade leading to the beak.  The comb is large and impressive on male birds, but females possess smaller versions of the comb as well.

Large combs are common among Mediterranean breeds because they help birds cool down in hot weather.  However, large combs can become a liability in extreme freezing weather, as they can make birds more prone to frost bite.  For this reason, it is recommended that you provide well insulated housing at night if below-freezing weather is particularly common or severe in your area.  We are located in North-West Washington, and only have about a month of freezing weather per year.  Our coops are draft-free, but uninsulated, and we haven't had problems. 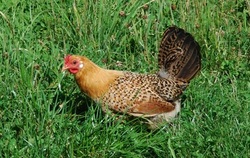 Another distinctive and unique feature of the breed is their unusual color pattern.  Sicilian Buttercups are sexually dimorphic, which means that males and females possess different color patterns.  Only about a third of chicken varieties fall into this category, and no other breed has the same pattern as the female Buttercup.

Females are a rich golden buff color with black spangles on their body feathers.  They have pure gold neck feathers for contrast.

Males are a shining red-orange color with long, greenish-black tail feathers.  While males are striking, their color pattern is similar to many other male chicken varieties.  The truly unique pattern belongs to female Buttercups.

Like many egg production birds, and all Mediterranean breeds, Sicilian Buttercups have yellow skin and white earlobes.  Yellow skin is desirable for egg production birds because it gives them a resource of yellow pigment to draw from while laying to make their yolks.  Yolks require so much yellow pigment, that hens will actually go through a bleaching process during laying, where much of their skin bleaches to a much lighter color.  During the bleaching process, a yellow skinned bird will be able to provide more pigment to their yolks than a white skinned bird.  White skin is desirable for meat production birds, because the skin shows up less on a dressed bird.  Since Buttercups and other Mediterranean breeds are bred primarily for eggs, having a white skinned carcass is not a priority, and yellow skin has become the standard.

Buttercups have willow-green legs, which contrast nicely with their body color.  Leg color is actually two layered, and green legs are seen when the outer-layer is yellow, and the under-layer is dark blue.  Therefore, sometimes hens will display blue legs if they have been laying long enough for the yellow outer-layer to bleach clear.  Some birds will actually be born with blue or yellow legs instead of green, and these are less desirable.  A bird with blue legs indicates that the skin is not yellow, but of a lighter shade.  A bird with yellow legs indicates that the legs lack the under-layer of blue.  Both are common defects among buttercups.  Read more about body and leg color on our blog!

Sicilian Buttercups have a similar body type to other Mediterranean breeds, such as Leghorns.  This long and light body frame allows them to produce high numbers of eggs on lower quantities of food, making them efficient layers.  Buttercups are prolific layers of white eggs, which makes them very attractive for home egg production.  Even bantam sized Buttercups produce eggs at a tremendous rate, although the eggs are of a slightly smaller size.

History of the Breed

Sicilian Buttercups originated on the Italian island of Sicily.  They are considered a very old "heritage" breed of chicken, and were first imported into the United States in the 1800's.  They are often referred to as "Buttercups" for short.

The American Standard of Perfection outlines the traits of different poultry breeds and is used as a judging reference at poultry shows in the US.  It is published by the American Poultry Association (APA), which is the oldest livestock breeders association in America, founded in 1873.

Sicilian Buttercups were admitted to the American Standard of Perfection in 1918, and classified in the Mediterranean Class.  True to their class, Buttercups are primarily a laying breed, producing large numbers of white eggs.  For such an ornamental breed, this is unusual, and makes them a great choice for home egg production.

Like most breeds, Buttercups started out as large fowl (regular sized chickens) and the bantam version was a later development.  Bantam Buttercups were admitted to the Standard in 1960, and classified in the All Other Combs Clean Legged Bantam Class.  You can see a comparison between our bantam and large fowl Buttercups in the photos below. We currently breed both.

In the past few decades, many heritage breeds have seen dramatic declines in breeding population nationwide, and the Sicilian Buttercup is no exception.  They have been hit especially hard, and are only bred by a few people in the United States today.  Janicki Buttercups is dedicated to improving the genetics of the breed and helping breeders start new flocks to increase the breeding population.