What is a Heritage Breed?

"Heritage" is a relatively new term being applied to various breeds of livestock that were used before the commercialization of agriculture in the mid 1900's.  Until recently, such breeds of poultry were simply referred to as Standard-Bred, but more on that later.

Most breeds classified as "heritage" have historic significance and useful traits for small farming practices.  Many of these breeds fell out of favor when commercial farming practices became prevalent, and only a few, specialized varieties remained prevalent.  However, these commercial birds are not the best suited for backyard production for a variety of reasons specified further down on this page.  Many useful and interesting breeds of poultry have become desperately rare in recent decades.

Why is it important to save heritage breeds?  Well first off, for genetic diversity.  Greater genetic diversity in the poultry world helps safeguard against destructive diseases and genetic bottlenecks.  Second, for their unique and useful traits, and their tremendous variety.  There are dozens of unique and useful poultry breeds with many different purposes and niches.  Having all of these different breeds gives opportunity for everyone to choose the perfect bird to fit their situation or personal tastes.  Many of these traits are uniquely suited to small farming practices, and cannot be found among commercial poultry varieties.  It is imperative that heritage breeds gain more breeders to protect them from extinction and preserve them for future generations.

There has recently been a large movement in favor of home-grown food and small, backyard farms.  This is a great opportunity for many rare, heritage breeds of poultry to finally regain traction to be saved from the brink of extinction.  Many of these breeds possess interesting and useful traits that are often uniquely suited for the purpose of small backyard flocks.  Unfortunately, like any large movement, there are plenty of misunderstandings and miscommunications about how to raise a backyard, heritage flock.

The first great misunderstanding is about purebred poultry and genetic diversity.  Some people advocate raising crossbreds to increase genetic diversity, since inbreeding is often associated with unhealthy or negative traits.  This belief is based partly on factual evidence; occasionally, purebred breeders will use inbreeding as a tactic to achieve a desired trait, or eliminate an undesirable trait.  However, all good breeders will never inbreed for long, and will usually keep more than one family of birds.  That way they can maintain genetic diversity in their flock, while improving the traits of their breed.

Keeping crossbreds can sound like a fun idea since random color patterns can appear, but there is never any predictability in crossbreeding.  It is impossible to breed toward any useful trait (including egg or meat production) since the genes are too varied and mixed.  Wild animal populations have good genetic diversity, but they are never random crossbred bunches.  Generally, they look similar to each other, have similar traits, and predictable offspring.  This is what purebred livestock provides.  Similar to wild animals species, a purebred breeding program will provide predictable, useful traits, while maintaining sufficient genetic diversity.  In fact, the need for greater genetic diversity is one of the most important reasons that these rare, heritage breeds need more breeding flocks.  Increasing the number of breeders is the most surefire way to increase genetic diversity.

The second misunderstanding is the disconnect between backyard chicken raisers and the show world.  Some people believe that all show chickens are useless and inbred, and are not suited for backyard production.  This is a widespread misconception.  While there is the occasional breeder who ignores production qualities and excessively inbreeds, they are a very small minority.  Most show breeders want birds that are useful as well as beautiful.  After all, it's hard to have a successful breeding program if your birds don't lay very many eggs.  Finally, if you care about saving and preserving heritage breeds, then you will need to follow similar guidelines to other breeders, or risk losing the original traits of your breed.

The most useful, productive, and practical backyard flock will be a purebred breeding program that follows the guidelines set forth by the American Standard of Perfection, published by the American Poultry Association (APA).  The APA is the oldest livestock breeds association in America, and publishes the Standard to provide guidelines for breeders and judges to conform to.

There is a misconception today that the Standard is only useful for show birds, but this couldn't be further from the truth.  Originally, the purpose of the Standard was to ensure that birds with useful traits would be preserved and improved for their marketable purpose.  Breeders who lived on different ends of the country could breed the same variety, and would still be conforming to the same Standard.  Without the Standard, there can be no Heritage breeds, since the Standard is what ensures they retain their traditional, unique, and useful qualities.  Breeding to the Standard may sound like a challenge, but it is a fun project that any backyard breeder can easily aspire to.
In recent decades, many hatcheries and commercial flocks have departed from the traditional guidelines set forth by the Standard, and are producing birds that are substantially different than the breeds they are derived from.  'Why is this a problem?' You might ask.  'After all, don't these new versions of the breeds produce more eggs?'  Not necessarily.

Mediterranean breeds like Buttercups and Leghorns have long been bred for high egg production, and remain some of the best egg producing breeds.  Commercial White Leghorns have recently been developed to produce even higher rates of lay than their Standard-Bred counterparts, but have lost some of their important traits.

When only a single trait is selected for, there are often problems that result.  Commercial leghorns have been bred for smaller body size to reduce feed consumption, but larger egg size.  This often results in health problems such as prolapse and internal egg breakage.  The early age of laying and unnaturally high rate of lay stresses the body and causes most hens to have a much shorter production life.  In commercial industry this is not a problem, since most hens are only kept for two years or less.  However, traditional strains of Leghorns and Buttercups have been widely known for hens that continue laying until nearly ten years of age or more, with no health problems.  For a backyard flock, this is the much more appealing option, and makes more sense for a breeding program as well.

Today however, most commercial meat production birds are hybrids.  Using two established breeds to create a single-generation hybrid is one of the most proven and effective methods to achieve high rates of growth, which is essential for meat production and makes great sense for the commercial industry.  However, simply keeping a crossbred backyard flock is not enough.  A second or third generation crossbred is never as productive, and always creates unpredictable results.  Only by keeping two separate flocks of purebred birds can a breeding program achieve these spectacular growth rates of a first-generation hybrid.

Most backyard breeders do not have the time, space, and resources to keep three separate flocks of birds to produce hybrids, and this has created a great demand for traditional, heritage meat production breeds.  However, most of these old-style meat production breeds have been bred by hatcheries for a decrease in size.  Hatcheries do not sell meat, and large birds are more expensive to feed.  If you purchase these old style meat breeds from a feed store or hatchery, you will discover that they typically only reach half the size of their original ancestors.  Today, the large, original heritage breeds of meat chicken can only be found by reaching out to small breeders who follow the APA Standard.
Today, if you buy a dual-pupose chicken breed from a hatchery or feed story, it will not be truly dual-purpose, but merely a marginal egg layer that grows too slowly and too small to offer much meat.  If you do not want to eat your birds and only desire egg production, then a Mediterranean breed or bantam could easily suit your needs, and will lay considerably better than these downsized dual-pupose breeds.
It is critically important that more breeders are found for Buttercups and other rare breeds.  The backyard farming movement is a wonderful opportunity to get more breeders involved to help save these breeds, and it is important that the efforts of these newcomers are not put to waste.

If you are interested in starting your own breeding program, or just getting some Buttercups for fun, contact us!  Even if you are interested in raising a different breed of poultry, we would be more than happy to offer any help or advice we can.  We have several useful breeders directories on many varieties of Standard-Bred poultry.  Even if you only want a small flock of a few birds, your efforts can make a huge difference in breed recovery.

Check out the photos below for a few more comparisons between standard-bred birds and commercial birds.  Also check out our links page for more websites.

New Hampshires are another great example of a traditionally dual-purpose American breed that has been watered down by commercial breeding.  In the above photo, the hen on the left is standard-bred, and the hen on the right is a hatchery bird. Note the difference in width and depth of body, and breast size. As a dual-purpose breed, body size and shape are useful and important characteristics. Also note that the feather color has been diluted in the hatchery bird, and it no longer possesses the rich red color so characteristic of the breed.

Photo credit to Mike Omeg. The standard-bred New Hampshire hen on the left is one from Mike's flock.  If you're interested in hearing more about his birds, check out his website at http://whiskeygulchnewhamps.com 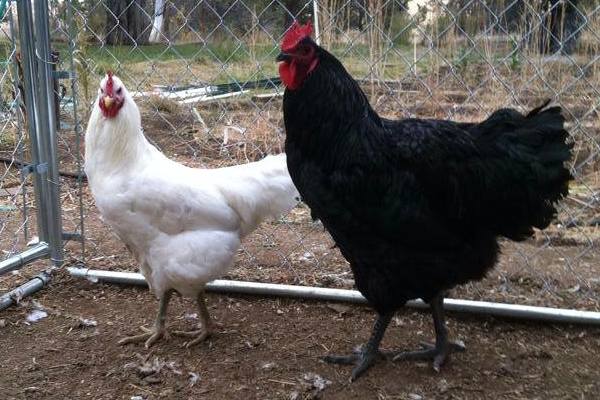 The above photo shows another comparison between commercial and standard-bred Jersey Giants, this time with male birds.  As a dual-purpose breed, size and weight are an important breed characteristic.  As you can see, commercial bloodlines have been diluted and lost many of their useful and traditional qualities. Photo credit to Sher Jennings

Useful traits are not the only traits lost in commercial breeding; traits of beauty have been lost too.  Compare the two Polish males above.

The first bird is standard-bred, and has a uniformly round crest that is mostly white, and a smooth transition from back to tail, all traits the next bird lacks.

The second bird is a commercial Polish, and has many inferior traits to the standard-bred Polish in the first photo. Note the haphazard and unruly state of the crest, which should be uniform and round. Note the large amount of colored feathers in the crest and the sharp angle from the back to the tail, both inferior traits.

While aesthetic traits are not necessarily useful, they are an important component in breed heritage. Beauty and usefulness both combine to make standard-bred poultry so fun to raise.

Photo credit to Sarah Cromwell at Heavenly Feathered Farms.  Check out her website if you're interested in getting some quality Polish.

It is hard to tell the size difference from the photos, but the standard-bred bird has a deeper and more useful body conformation.

Other differences may appear subtle to the casual observer, but are still significant.  As far as appearances are concerned, the second bird has sparse and inferior beard plumage, and undesirable dark streaking in her feathers.  While these traits do not correlate directly to production qualities, they nonetheless contribute to the traditional look and heritage of the breed.